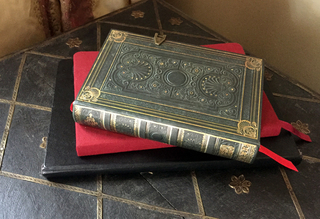 Note: This essay was written at the request of James River Writers, and appeared in its monthly newsletter on September 6, 2019.

It has been nine years since I made my circuitous way through Richmond and its baffling one-way streets to find the offices of James River Writers, which were then located on Hull Street. I had just moved to RVA from northeast Ohio, leaving behind harsh winters, a cozy home, and the cozier security of a full-time job to begin a new chapter with a new husband.

That job was in the communications office at the small liberal arts college where I had earned my bachelor of arts degree, in English and creative writing, when I was in my thirties. I wrote press releases and articles for a living, and I was good at it. I felt tethered to the school since that's where all of my intellectual awakenings had taken place. I could still bump into my former professors crossing the town square. I joined a book club with other like-minded friends and colleagues. Saying goodbye to all that left me feeling unmoored. It was in that frame of mind that I embarked on my quest to find a new community of writers and readers. And it was in that frame of mind that I first met Anne Bryan Westrick.

Anne, JRW's administrative director, was busy at her desk when I arrived but had been expecting me. She was my introduction to the Richmond writing community, and could not have been more welcoming and reassuring. To say that Anne and I clicked is like saying that the earth orbits the sun. Her warmth and genuine interest in me and my work led to an immediate bond that still holds fast, even though nearly ten years and 500 miles now separate us. She encouraged me to join JRW, of course, but she also made me feel as though I were already a part of it. She suggested I volunteer at its upcoming conference and attend some of the writing shows. In subsequent months Anne introduced me to Meg Medina, Gigi Amateau, and Virginia Pye, and just like that, I was part of a new community of writers and readers. A new community of like-minded people.

I cannot emphasize enough how beneficial all of this was to me. It was a lifeline during that first year in Richmond.

Although my undergraduate bona fides were solid, I did not go to graduate school. James River Writers was my de facto MFA program. I learned about such mysteries as "dialogue tags" and Pitchapalooza (Hi Arielle! Hi David!), and how to converse intelligently with a literary agent, write a query letter, and hone a five-minute book pitch. Perhaps more than anything, I learned that there was life after the security of full-time employment. Through JRW I gained the confidence to start my own freelance business (KeyWord Communications, LLC), begin a blog, and cold-call the Richmond Times-Dispatch to suggest stories.

Fast-forward to an August evening in my writing office at my home in Avon, Ohio. The papers, books, and binders on my desk and surrounding work areas only slightly approximate something called organization. Sandy, our Cavalier King Charles Spaniel, lies in her usual spot on the floor next to me, snoring softly. The waning sunlight shimmers through the leaves on the Bradford pear tree across the street.

I am two months away from seeing my first nonfiction book appear in print. The History Press, an imprint of Arcadia Publishing, is releasing a book based on articles I've written for my hometown newspaper about Elyria, Ohio, the place where I grew up. For more than two years, I've researched, reported, and written the articles and the book—a labor of love and a startling departure for me in terms of subject matter. As my breathing winds down and I settle into the final lap toward production (approving the cover, preparing to proof the final manuscript) I realize there exists the smallest of intervals before I must tend to the details of life after publication (book promotion and launch party, readings and interviews and the like). Then, far off on the horizon, so small that I might miss it if I didn't know I wanted it to be there, waits the next unchartered territory. Let's call it "The Next Book."

It has been six years since I left RVA and returned home to Ohio. And although I've joined a writer's organization in the area, I maintain that there is nothing, nothing like James River Writers. It is unique. It is a community that inspires a writer's commitment—not only to the act and art of putting words into sentences, rearranging them, and stringing them into a coherent narrative, but also to a sort of reverence and respect for the profession.

Whatever your genre, whatever your place in the publishing cosmos, it is a wonderful thing, when asked, "So. What do you do?" to be able to reply:

James River Writers, I thank you.

Looking Back at Elyria: A Midwest City at Midcentury

Combining elements of journalism, historical research, and memoir, Looking Back at Elyria: A Midwest City at Midcentury captures a time when an American city was poised on the bridge between innocence and experience. Based on articles that originally appeared in The Chronicle-Telegram, the book is a love letter to a hometown.

The real and true adventures of remarriage at life’s midpoint.